The rise of home cooking in COVID-19 lockdowns and the increasing interest by consumers in plant-based foods have combined at the right time, say the founders of Forbidden Foods as the group made a barnstorming debut on the ASX.

The rise of home cooking in COVID-19 lockdowns and the increasing interest by consumers in plant-based foods have combined at the right time, say the founders of Forbidden Foods as the group made a barnstorming debut on the ASX. 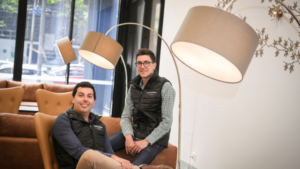 Marcus Brown, left, and Jarrod Milani, founders of Forbidden Foods, which listed on the ASX on Monday.

Chief executive Marcus Brown said all of the group’s main brands – Forbidden, Sensory Mills and Funch – are entirely plant-based across a range of products including black rice, protein balls, organic baby food and puree, and specialist flour and powders.

Mr Brown said there had been a spike in sales in the past few months as more people stayed at home and shifted to home cooking in COVID-19 lockdowns.

“A lot of the home-eating trend has come right through,” he said.

Mr Brown and co-founder Jarrod Milani each hold a 12.4 per cent stake in the listed entity, which debuted on the ASX after raising $6 million in a float managed by BW Equities where 30 million shares were issued at 20¢ each.

The chairman of Forbidden Foods is Mark Hardgrave, who also chairs ASX-listed Pental Ltd, the maker of White King bleach, which has enjoyed a purple patch amid the heightened focus on cleaning and hygiene during the pandemic.

Drakes, which runs a network of supermarkets in South Australia and Queensland, has already been prominent in the plant-based food segment with deals to stock plant-based “meat” produced by v2food, backed by Rich Lister and Hungry Jack’s owner Jack Cowin.

V2food began a push in early August in supermarkets, with plant-based mince and burgers stocked in the meat aisle in 61 Drakes outlets.

“That’s a big part of the business in the future,” he said. “It’s easy to scale.”

Forbidden Foods mainly uses Australia Post for its deliveries and Mr Brown said in the latest stage four lockdowns in Melbourne there had been some slight delays. Australia Post has been under huge pressure in the past few months keeping up with heavy demand at thousands of e-commerce companies in a major structural shift from bricks-and-mortar retailing.

But customers were very understanding about delivery logjams, he said.

Forbidden Foods sells about 10 per cent of its products overseas, with New Zealand the main export destination. Some product also goes to the United States and Britain.

He said China would be a future target once the trade spat between Canberra and Beijing settled down.

One of the pioneers in the worldwide shift to plant-based “meat” is the US group Beyond Meat, which has a sharemarket capitalisation of close to $US8 billion ($11 billion), although it has come off since hitting a peak in mid-2019.